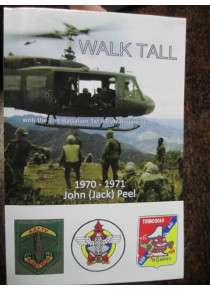 Australian Vietnam War Book, compelling reading, story of an Australian Soldier's experiences during his tour of duty in Vietnam.
A scarce first hand account of a member of the legendary AATTV ‘The Team’.
The Author, John (Jack) Peel enlisted with the Australian Army in 1959. From 1962 to 69 he served in the Royal Australian Engineers Transportation. During 1968, he volunteered for service with the Australian Army Training Team Vietnam AATTV.
He arrived into South Vietnam in 1970 and was embedded into 2nd Battalion 1st ARVN Regiment – he was the last member of the AATTV to serve with this renowned South Vietnamese Army Battalion.

Jack was the last, in a long line of Australians to serve with the 2nd Battalion, before him were other Australian soldiers among them, Bob ‘Mac’ King, ‘Shakey’ Gabriel, Ray Oliver MM, Ian McQuire (Adjutant AATTV), Len Opie DCM and Len Fitzgerald who was KIA 17th April 1970.
Jack's personal photographs support the detailed text and his vivid battle descriptions are accompanied by maps.

This is Jack’s Vietnam War History – He Was There For Australia!