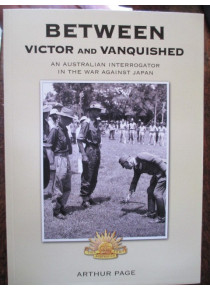 BETWEEN VICTOR AND VANQUISHED An Australian Soldier interrogator during WW2

BETWEEN VICTOR AND VANQUISHED  An Australian Interrogator in the War Against Japan by A. Page : new book

ARTHUR PAGE was born in Japan of Russian and Greek parents and the family fled the country in 1941. He reached Australia where he and his father joined the Australian Army. A natural Japanese linguist, Arthur became an interrogator and served with the Americans in the Pacific War, where he questioned enemy prisoners for information.

This book tells of his experiences and those of the American Nisei Japanese military linguists and the vital part they all played in the Pacific War. They shared the front line with Australian Diggers and  American GIs and never faltered in their task as they endured privations in jungle and swamp. The ATIS men also examined enemy documents, gleaning what information they could in the fight to save Allied lives.

Arthur later landed with US forces in the Philippines serving as a combat interrogator of Japanese prisoners in that campaign. He also served in Borneo as an interpreter for Japanese surrender negotiations, followed by duties as a war crimes investigator, preparatory to some Japanese being brought before a court for their actions.

This book provides a rare insight into a little-known chapter of Australia's wartime history.