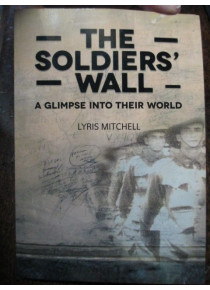 The Soldiers Wall A Glimpse Into Their World by L. Mitchell

In 2008, workers undertaking renovations in Brisbane's City Hall discovered soldiers’ graffiti. The wall which formed part of a Urinal, had been plastered up back in the war years but not before soldiers left their names and messages using pencils. The find’s historical significance was recognised and the Council’s heritage team started to record the soldiers’ graffiti.
The author, Lyris Mitchell who was a former City Hall tour guide and historian, ﻿set about finding any and all particulars about the soldiers - their service life before and after signing “The Soldiers’ Wall”.
This book provides the case studies of the various graffiti signature and where possible photographs of the men who signed. Most importantly the book provides historical accounts of WW2 life in Brisbane. Brisbane in this period was the HQ of Allied Forces with thousands of servicemen being stationed around the City.

This book would be of interest to family historians, soldier medal researchers and all others seeking to touch those early war years in Brisbane.
﻿