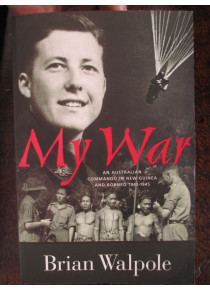 My War An Australian Commando in New Guinea and Borneo 1943-1945 by B Walpole ; used book

Brian Walpole, the author, was a Australian Z Force Commando behind enemy lines in New Guinea and Borneo during WW2.

Brian was a commando with the Australian 2/3 Independent Company. He went to New Guinea in January 1943 and remained until the fall of the Japanese base at Salamaua in September. He fought on the Bobdubi Ridge. His commanding officer was the well-regarded George Warfe, whose portrait was sketched by war artist Ivor Hele.

Brian blazed a trail through the New Guinea jungle which appears on some maps as Walpole’s Track, discovering and naming the ambush site Goodview Junction. Soon afterwards (July 1943) Goodview Junction was the scene of a key campaign victory which contributed to George Warfe being awarded the Military Cross.

After the surrender, Walpole's work continued as many of the Japanese did not recognise the surrender and continued to fight on. Brian relates how on the 14th of September 1945 while still an operative in Z Force he was able to save POWs from certain death and after a firefight arrested 10 Japanese soldiers at Simanggang Borneo. He was alone and had been assisted in the battle by 20 headhunters from the jungles along the Rejang River. One of the people saved was a young nurse in her 20s, Lena Ricketts.

Walpole writes, "She was absolutely covered in filth and wore clothes so shredded they were barely even rags. She had been forced to clean gutters she was forbidden to wash, the look on her face was utterly desperate, a month after Japan's unconditional surrender, she was to be put to death along with all the other prisoners of war."
Lena survived the war and 50 odd years later Walpole was reunited with Lena.