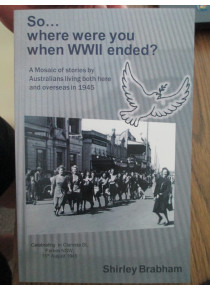 So.. where were you when WWII ended? 117 Personal Stories

So… where were you when WWII ended? by S Brabham

An interesting book that focuses on one of the most important days in the History of the 20th Century. The day that World War Two ended August 15, 1945. All 117 stories have all been gathered from ordinary Australian who were living both here and overseas during WWII.

Among the stories told in the collection are those of: