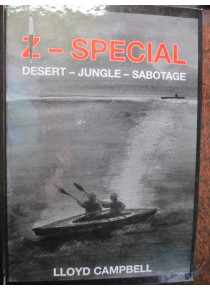 Story of Australian WW2 Veteran Lloyd Campbell. Joined the 2 17th Battalion early in WW2 and went with the Battalion to North Africa. Where he fought as a Rat of Tobruk and later at the Battle of El Alamein. He was recalled to Australia then went on to Milne Bay and the Lae Finschhafen Campaigns.

In mid 1943, he transferred to 'Z' Force. As a signaller member of Z Special he undertook clandestine behind line raids. One raid included traveling by submarine to Vietnam to launch sabotage raids on the railways. He was awarded a MID for these raids.