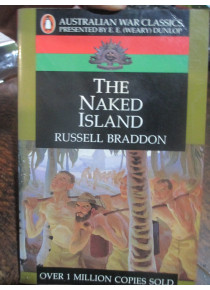 'The Naked Island book was first published in 1952. The book was released on the 6 February 1952 unfortunately, that was the day King George VI died. The book's initial printing quantity of 10,000 was reduced to 3,000.﻿ However, in the longterm the book become highly successful with more than a million books being sold by the early 70's. it is said that the book has now sold more than 2 million.
Interesting National Library read click here

In 1941, after graduating from the University of Sydney, Russell Braddon enlisted in the Australian Army.

Together with thousands of other young Australian soldiers, he was sent to Malaya, where Allied forces were attempting to halt the territorial expansion of the Japanese. Although much vaunted as an impregnable fortress, Singapore proved instead to be a deadly trap, and Braddon spent almost four years as a prisoner of war after the city fell to the Japanese.

This is not only the harrowing record of the years he spent struggling for survival in the notorious Pudu Gaol, in Changi, and in the tragic H Force on the Thai-Burma railway, but also of the equally brutal treatment of the native populations by the Japanese and the hollowness of the Greater Asian Co-prosperity Sphere they promised. Braddon emerged from Changi on swollen legs and ulcerated feet, from calls with desperate illnesses such as beri-beri and other starvation diseases, malaria and dysentery. Intelligent, tough, resourceful and tough in body and spirit, he was determined to surmount his ordeal. He even sharpened his mind by memorising the sole available book Mein Kampf !

The Naked Island vividly portrays battle and prison life as experienced in the ranks. It is a tale of heroism, horror, squalor, starvation and disease endured with fortitude, ironic humour and extraordinary ingenuity.