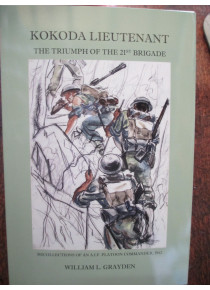 KOKODA LIEUTENANT THe Triumph of the 21st Brigade 16th Battalion
by W. Grayden

Lt Bill Grayden, a member of the 2/16 Battalion under Brig. Arnold Potts, led his men in the bitter fighting of Kokoda in 1942. This book is possibly the only one written by a member of the 16th Battalion.

The Isurava-Ioribaiwa segment of the Kokoda Track campaign is one of the most significant in Australia’s military history and yet is one of the least understood in terms of its significance.

It was in the mountains and swamps of New Guinea that the previously unstoppable Japanese Army was turned for the first time by a small dedicated Australian force in the most inhospitable terrain imaginable.

The almost certainty of Japan establishing a forward base for attacks on Australia and cutting our all-important supply line from the United States was averted.

While many books have been written on Kokoda, few, if any, of the authors served in the campaign.

This is the story of the men who fought under the inspired leadership of Brigadier Arnold Potts in the land equivalent of the Battle of the Coral Sea.

Kokoda Lieutenant – The Triumph of the 21st Brigade is a book that should be read by every Australian and particularly by serving and former members of the ADF. It should also be compelling reading for the relatives of the men who served at any stage or in any of the Australian units in the Kokoda Track campaign.

The Kokoda Track campaign averted a very real and very serious threat to mainland Australia. It was, in every sense, a war on Australia’s doorstep.

This was Australia’s Thermopylae. In 480 BC Leonidas and his 300 Spartans destroyed a far superior force but died to the man. We remember the Spartans, and their message,

‘Go, tell the Spartans, stranger passing by
That here, obedient to their laws, we lie.’

Our soldiers turned back a superior force in appalling conditions, and at terrible cost.

Hampered by degenerate leaders, MacArthur and Blamey, it was a remarkable achievement.

The book introduces the 2/16th in the Middle East, and discusses the return to Australia, the US forces, and Bill’s time with Mitchell’s Guerilla Warfare Group. A summary and analysis of the campaign shows the shallowness of modern academic critics.