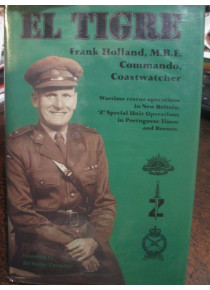 Based on the files of Lt Frank Holland an Australian WW2 Commando and Coastwatcher.

Commander Eric Feldt in his book "The Coast Watchers" described Frank Holland as pure Hemingway. However, Ernest Hemingway, great storyteller that he was, would not have dared to create a character of such unbelievable quality.

He would not have dared to present his readers with a composite of adventurer, pioneer, jungle man, behind the lines commando and civil engineer and reasonably expect those readers to accept him as true to life. And yet Frank Holland was all these things and more.

Frank's exploits after the fall of Rabaul are now of legend. For his extraordinary demeanour during these dark days, Frank was awarded the M.B.E.

He was enlisted as an officer into "Z" Special Force and inserted into Timor where he operated behind Japanese lines, organising resistance forces. He was then inserted behind the lines in Borneo where he served in clandestine operations until war's end, accepting the surrender of the local Japanese commander in September 1945.

After the war he returned to Rabaul.

This book is a biography History of his WW2 war service.