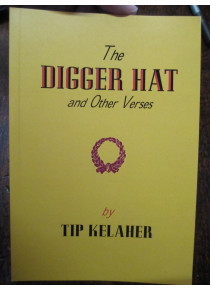 The Digger Hat and Other Verses - Tobruk veteran

The Digger Hat and Other Verses﻿ by Tip Kelaher - new Book

This is a collection of poetry written by a Tobruk veteran﻿ Tip Kelaher﻿.
Tip Kelaher﻿, in 1940 enlisted in the 2 2nd Australian Machine gun Battalion. The Battalion sailed for the Middle East in late 1940. Just after arriving in Palestine, Tip Kelaher, wrote his 1st poem entitled, 'The Digger Hat' which brilliantly caught the spirit of the AIF and was﻿ widely acclaimed. He wrote many poems, not all about the battlefield but many about the reminiscing of a soldier away from home.

Regrettably, Tip did not survive the war and was killed at El Alamein on 14 July 1942. Tragically, 4 months later his younger brother Emmot was also killed in action. In 1942, Tip's collection of poetry was published into a small book of which this book is a 2003 reprint edition.﻿