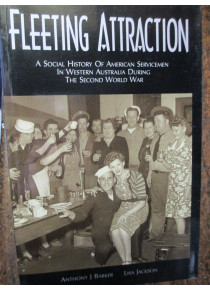 Fleeting Attraction documents the remarkable interlude between US serviceman and the girls of Western Australia during World War II.

US sailors started to arrive in early 1942, they were greeted by West Australians as handsome heroes from a Hollywood dreamworld, offering protection from invasion as the Japanese bombed the State's northern outposts.

Over the next 3 years some thousands of Naval personnel in Perth, Fremantle, Albany and Geraldton continued to have an impact that was both more intense and more welcome than it was in any other part of Australia.

Needing nothing from the host community except the warmth of human companionship, the Americans would take away with them as war brides more than 1000 of the West Australian women.﻿

Thousands of women pursued what seemed like a small amount of Americans. One local woman, said that 'during wartime sex becomes so much more important than it is ordinarily'.

In some of the smaller towns, like Albany the American shore leave had to be rationed to one night in 3, so that the more adventurous girls 'didn't get entirely worn out'. The arrangement, however, allowed those with stamina to run 2 or 3 boyfriends at a time.
As far as the American serviceman were concerned many were from 'small town' America. Many had never been away from their home towns before. These men 'went a little bit crazy. They were young and would drink and they wanted the girls'.﻿