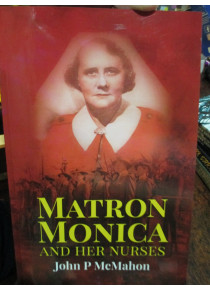 An Australian Army Matron in Australia, New Guinea and Japan

As a triple certificated nurse Monica joined the Australian Army Nursing Service (AANS) and in late 1941 became the matron of an Australian military hospital at Puckapunyal. Then she was a matron at the internment hospital at Tatura, a hospital ship Wanganella, 11 other Australian military hospitals, a camp hospital at Koitaki New Guinea and the 130th Australian General Hospital at Eta Jima Island Japan. Her detachments of commissioned Australian Army Nursing Service members formed patient-care communities with both male and female members of Army officers and other ranks. Monicas War highlights male orderlies and doctors medical work at the life threatening front-line Kokoda Track. In rear based hospitals, Monica and her AANS sisters coordinated the patientcare of servicemen suffering from malaria and scrub typhus, other tropical diseases, facial wounds and post-traumatic stress disorders.

Monica developed a skin disease called exfoliate dermatitis at Koitake and was evacuated from the 47th Camp Hospital, where she was the matron, to two New Guinea hospitals and was finally rehabilitated at the Heidelberg Military Hospital in Victoria. As if in a personal war, she fought against this frailty in her body. She also fought a gender war against male attempts to prevent AANS members from nursing soldiers with venereal diseases, others suffering from severe and suicidal depression and bans on her nurses. Teaching some Japanese nurses aspects of patient care for Japanese civilians suffering from the effects of atomic radiation at Hiroshima.

Monicas War depicts other Australian matrons and AANS members as compassionate, resourceful and self-sacrificing women, especially during the Japanese massacre of some members at Banka Island, Malaysia.﻿