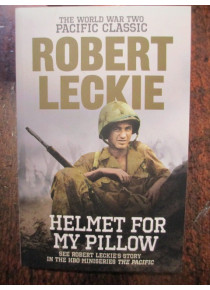 Helmet for My Pillow by R Leckie Book

Helmet for my Pillow by R Leckie

Helmet for my Pillow by R Leckie

Obviously Robert Leckie was not an Australian digger. We obtain many messages about this book due to its prominence as Robert Leckie’s memoirs were used as part of the real-life basis for HBO’s The Pacific TV series.

He served as a scout and a machine gunner in H Company, 2nd Battalion, 1st Marines, 1st Marine Division (H/2/1). Leckie saw combat in the Guadalcanal Campaign, the Battle of Cape Gloucester, and was wounded by blast concussion in the Battle of Peleliu﻿