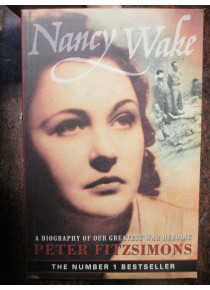 Nancy Wake was born in New Zealand but moved to Australia at a very young age.
In 1937, Wake met wealthy French industrialist Henri Edmond Fiocca (1898–1943), whom she married on 30 November 1939. She was living in Marseille, France when Germany invaded. Nancy Wake witnessed a horrific scene of Nazi violence in a Viennese street. From that time on she vowed to do everything she could to rid France and Europe of the Nazi influence.

She became highly successful in a escape network for Allied soldiers, perfectly camouflaged by Nancy’s high-society life in Marseille. The Gestapo, had dubbed her "the white mouse" for her knack of slipping through its traps.

Nancy was a passionate enemy of the Nazis. Supplying weapons and training members of a powerful underground fighting force, organising Allied parachute drops, cycling four hundred kilometres across a mountain range to find a new transmitting radio - nothing seemed too difficult in her fight against the Nazis.