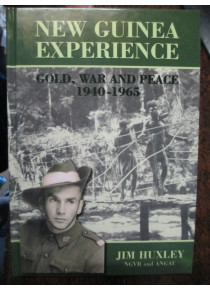 The author, the young Jim Huxley, went to the New Guinea Goldfields in 1940, he writes of  many pre-war characters he met while working goldfields on the Wau-Bulolo gold areas. Of course many of those people later become envolved in the war.
At the advent of 1941 he joined the New Guinea Volunteer Rifles (NGVR). When the Japanese arrived on the New Guinea coast, Wau became a base for Australian commandos.

A large hard cased book of 388 pages of which around 200 pages deals directly his war experiences with NGVR and later ANGAU.