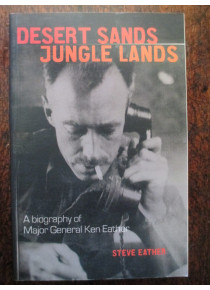 When war broke out in 1939 Ken Eather was said to be the third soldier to enlist in the AIF in New South Wales. He formed the second 1st Battalion of the AIF and went on to lead it with distinction.

He personally played a vital role in the victory over the Italians at Bardia and he was prominent in the battle to capture Tobruk. In December 1941, he was promoted to brigadier and took over the command of the 25th Brigade.

In New Guinea, he led that Brigade and the critical and  highly contentious battles at Iorbaiwa and Imita Ridge. His troops then spearheaded the recapture of the KOKODA track. Followed by the bloody fighting at Gona.
In 1946, he led the Australian contingent at the London Victory Parade﻿