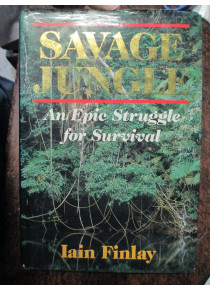 Savage Jungle. An Epic Struggle for Survival by I. Finlay

An incredible story of how one member of the Australian 2/ 29th Battalion , left to die in the jungles of Malaya during World War II, after the battalion had been decimated during the Japanese offensive to take Singapore, survives, living on the run in unbelievably hostile circumstances, without ever being captured.

At the end of WW2, of the 13872 men who survived the Fall of Singapore (as POWs of the Japanese) this is the only written account of a soldier who never surrendered.

In January 1942 British, Australian and Indian forces clashed for the first time with a Japanese army of close to 10,000 that was charging southward down the Malayan Peninsula in a seemingly unstoppable march on Singapore. Arthur Shephard, a corporal in the Australian 2/29th Battalion, took part in the only ‘successful’ battles in the six-week campaign, at Muar and Bakri, in which a force of Japanese Imperial Guards, of vastly superior numbers, were held up for several days. Eventually overwhelmed, the 2/29th and other allied units withdrew, to fall back on Singapore, final defeat and incarceration until the end of the Pacific War, in Changi prisoner of war camp and on the Burma Railroad. But, Arthur Shephard and three other badly wounded soldiers, unable to keep up with the retreat through the rubber trees, had been left behind to fend for themselves and...basically, they knew...to die.

Here is the amazing account of how he survived for three-and-a-half years, always on the move, in the jungles of Malaya, never to be captured by the Japanese. As two of his companions die of their shocking wounds, Arthur and his close friend ‘Lofty’ are led by an old Chinese timber-cutter into safe hiding in the deep jungle. There they meet members of the fledgling Chinese communist guerilla forces who will grow to become a powerful independent force that constantly harries and attacks the Japanese occupiers from mobile camps in the jungle.﻿