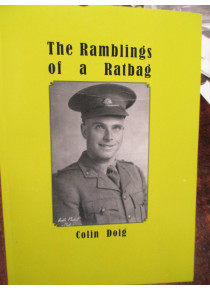 The Ramblings of a Ratbag﻿ by C Doig - New book

The Ramblings of a Ratbag﻿﻿ was privately published in 1989 with a print of only 100 copies. This is a new edition of that autobiography by Colin Doig.

When World War II was declared, Doig joined the 2/2 Commandos 'The Double Red Diamonds'﻿. His war experiences in Timor and the group of men with whom he served had a profound influence on the rest of his life. About 70% of this book is devoted to his war experiences.﻿

In 1986, he wrote the history of his unit, A History of the 2nd Independent Company and 2/2 Commando Squadron. In Ramblings of a Ratbag, Colin Doig reveals more details of his personal involvement within the unit and operations personally undertaken by himself. ﻿

The 2nd Independent Company men were Australia’s first commandos. In early 1942 there was a relentless and unstoppable advance of the Japanese towards Australia. In Timor this band of 270 men became the only unit in the entire Australian Army ( Sparrow Force) to remain as a constant force against the Japanese offensive action on the island. These men﻿ stood their ground, conducting guerrilla activities against the Japanese whom they eventually fought to a standstill in Portuguese Timor.﻿

After their successful Timor ﻿action the unit was reformed, renamed and fought in the later New Guinea and New Britain campaigns.

Colin Doig was the commander of Don Company, his Company assisted Damien Parer to make his film, "Men of Timor" about the struggle of the Australian commandos against the Japanese. ﻿