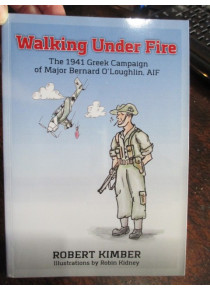 It is rare to find books about the WW2 Australian Greek campaign. This book would be of high interest to anyone who had family who fought in the campaign.﻿

Walking Under Fire is based on Major O'Loughlin's diaries and letters. Robert Kimber lived for four months in Greece and followed the course of the 1941 campaign from Macedonia and Mt Olympus through Corinth to Tolo, Spetzai and Crete. He studied the villages, met the people and photographed the land where the 6th Division fought.
Walking Under Fire is the result.﻿

It's one man's remarkable journey with the 6th Division, 2nd Australian Imperial Force.
In late March 1941, the Australian 6th Division moved from the heat and sandstorms of the Western Desert to the rain and snow of mountainous Greece.

The soldiers were assigned the task of stalling Hitler's invasion. However it was a near-hopeless task, as the Allied force had no tanks and few aircraft. The Australians are soon caught up in a chaotic fighting retreat to the beaches where thousands of troops wait to be evacuated by the navy.
Right in the thick of this rout is thirty-five year old Major Bernie O'Loughlin. After organising one of seven evacuation sites at Tolo Beach, he is among 1,500 men who are left behind. Determined not to fall into captivity, O'Loughlin leads a growing band of soldiers surviving behind enemy lines as they seek a means of escape to Crete.
O'Loughlin's leadership was exemplary. As a man well-read he sees Greece as more than a battlefield. It is a metaphor for existence, with a rich communal life and creative spirit.