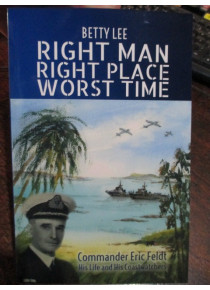 History of Commander Feldt & his Coastwatchers

In May 1939, Australia's Naval Intelligence had the foresight to set up a network of men located on various islands north of Australia to report on suspicious shipping movements near their coast. Only one man was considered ideal for commanding this top secret mission - Eric Feldt. Feldt was given the title Staff Officer Intelligence in Port Moresby. His task - recruit the civilian volunteers to be Coastwatchers.

When war came to the Pacific these men were critical to the security of Australia and the US South Pacific Fleet. US Fleet Admiral Halsey told a gathering of the Australian-American Association, `I could get down on my knees every night and thank God for Commander Eric Feldt.'

This is the story of Eric Feldt and his Coastwatchers.﻿

This book is written by Betty Lee,  Eric Feldt﻿ was her Great Uncle.

The book is devoted to the war years with chapters written about the beginning of World War II Coast Watchers, The Fall of Rabaul and the Aftermath, the Coastwatchers of Bougainville, Guadalcanal, and other Solomon Islands, Townsville, the Paluma and Papua New Guinea .﻿