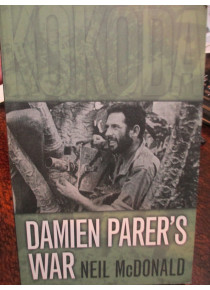 The story of Damien Parer - Australia's greatest war photographer, whose legendary 1942 documentary on Kokoda broke the news to a shocked Australia of the desperate fighting to the north.

Damien Parer was without doubt Australia's greatest war photographer. He helped create the Anzac legend - and many, many of our iconic war images are his photographs.

He served his apprenticeship as a stills photographer on the famous Chauvel film, 'Forty Thousand Horsemen', and was appointed Official Photographer covering the Australian fighting in the early days of World War II in Greece and Syria, and Tobruk.

His most famous documentary is 'Kokoda Front Line!' , made during the darkest days of the campaign in mid-1942 (it went on to win Australia's first Academy Award). His photographs and films brought the war home to Australians - and are now an integral part of our military history. He died in action - shot by Japanese machine gun fire, as he filmed an American advance on Peleliu.