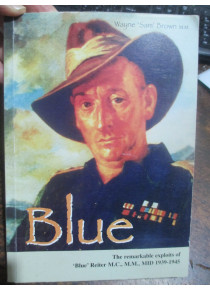 The remarkable story of ‘Blue’ Reiter MC MM and his exploits during World War 2. VX4024 Lieutenant Frank A Reiter, MC, MM, enlisted in the 2/7th Australian Infantry Battalion soon after the outbreak of war in 1939 and served with the unit in Greece and Crete,where he was wounded leading a bayonet charge. He was awarded the Military Medal (MM) for his services in Crete. Commissioned in 1942 he joined the 51st Battalion which was shortly afterwards linked with the 31st to become the 31/51st Battalion. With this unit Reiter served at Nerauke, then in Dutch New Guinea in 1943, and on Bougainville 1944. He gained the Military Cross (MC) during this campaign.