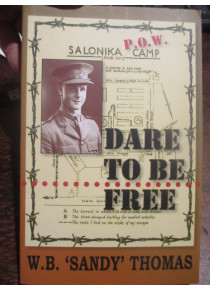 $28.00
Dare to be Free  W B Sandy Thomas
When the Germans invaded Crete in 1941, Sandy Thomas ( New Zealand Division 23rd Battalion ) was wounded, he was taken POW and transferred to the Greek mainland . Despite being severely wounded in the leg he attempted several escapes, including being carried out of his POW camp in a coffin. He finally succeeded in a spectacular escape, and made his way across Greece to Mount Athos, a rocky peninsula populated solely by monks. Here he evaded capture for over a year, before finally stealing a boat and navigating his way through winter seas to freedom in Turkey. This, his story, is one of the great escape narratives of the Second World War.