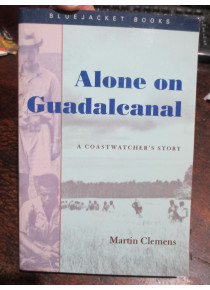 Alone on Guadalcanal a Coastwatchers Story by M Clemens

$45.00
Alone on Guadalcanal a Coastwatchers Story by M Clemens

A remarkable memoir by the near-mythic coastwatcher who helped shape the first great Allied counter-offensive in the Pacific war.

Major Warren Frederick Martin Clemens CBE, AM, MC (17 April 1915 – 31 May 2009) was a British colonial administrator and soldier who later moved to Australia. In late 1941 and early 1942, while serving as a District Officer in the Solomon Islands, he helped prepare the area for eventual resistance to Japanese occupation.

His additional duties as a coastwatcher alerted the Allies to Japanese plans to build an airstrip on Guadalcanal. This resulted in Allied carrier raids and eventually a landing by United States forces and the beginning of the epic struggle in the Solomons. Clemens then directly served the U.S. Marines in coordinating intelligence on Japanese activities.