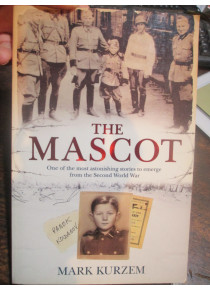 The Mascot By Mark Kurzem Book

$19.00
The Mascot B: Mark Kurzem
One summer's day in 1997, Mark Kurzem returned home to find his father on his doorstep. Alex Kurzem had travelled halfway round the world to reveal a long-kept secret, and now wanted his son's help to piece together his past and his identity.

As a five-year-old during the Second World War, Alex Kurzem had watched from a tree as his entire village, including his family, were murdered by a German-led execution squad. He scavenged in the forests of Russia for several months before falling into the hands of a Latvian SS company. After one soldier discovered this young boy was actually Jewish, Alex was made to promise never to reveal his true identity - to forget his old life, his family, and even his name. The young boy became the company's mascot and part of the Nazi propaganda machine responsible for killing his own people.

After the war Alex was adopted and his new family made a home in Australia, far from the sites of wartime atrocities. But after fifty years of holding onto this childhood secret, Alex needed to discover and share the astonishing truth about his past.