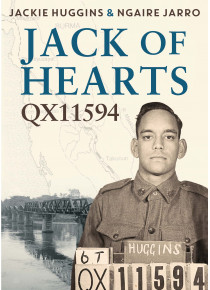 'It has been over 100 years since our father was born, 80 years since Father enlisted in the AIF, and over 60 years since he died. How do we go beyond what we knew from our Mother's stories of him? The past, present and future need to be spoken about and shared.' - Jackie Huggins

Born an only child in North Queensland, Jack Huggins had an idyllic childhood in Ayr, where his family somehow escaped the harsh Queensland government treatment of First Nations' peoples. His father was in the army in World War I and Jack followed in his footsteps into World War II.  Jack was a member of C Company 29th Battalion and was present at the Battle of Muar Road. He was captured by the Japanese in Singapore and spent much of the war on the notorious Burma-Thailand railway.