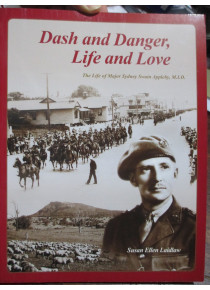 $28.00
Dash and Danger, Life and Love – The Life of Major Sydney Swain Appleby, M.I.D. by S E Laidlaw
Biography of Major Sydney Appleby who prior to WW2 lived at Maroon near Boonah Qld. He was a member of the local Light Horse troop. In early WW2 he conducted reconnaissance around Cape York Peninsula. Later war he joined the Far Eastern Liaison Office which undertook duties connected with the invasion at Labuan. Afterwards the surrender of the Japanese at Kuching.

Post war he become active in the creation of the  2nd/14th Light Horse Regiment Museum.

Interesting information about the Labuan invasion and Kuching from wartime letters, photographs, maps and family research.