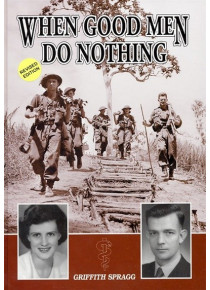 When Good Men Do Nothing by G. Spragg: new book

Griffith Spragg, was born in West Maitland on 24 January 1922. He began his working life as a Junior Clerk at the Commonwealth Bank of Australia in 1939, and enlisted in the Australian Imperial Force ( AIF ) in July 1941. In January 1942 he was posted as a reinforcement to
D company of 2/3 Australian Infantry Battalion in Syria, remaining with that unit until it was disbanded in February 1946. Several Chapters relat to his service with the Battalion at Kokoda Eora Creek Sanananda

After his stint in the army, he began medical studies in 1947, graduating in medicine at Sydney University in 1953. He undertook his residency at Royal South Sydney Hospital with is was an active regional hospital, there gaining practical experience.

This book covers the very interesting life of an average Australian as he gives the reader an introspective look into the mind of a front-line soldier. His medical career is equally interesting as he portrays the experiences of a country GP, then a psychiatrist who was constantly fighting the bureaucracy of state-run medicine.

Called back to the army he later had a tour in Vietnam as Doctor psychiatrist with the Australian Force. After his return, he became involved with the 'Greek Conspiracy' investigation. He has battled against the attitudes of the military, regarding the way it classified and managed men who were suffering from battle stress. Throughout his book we see how events in his earlier years, particularly in the Pacific War, influenced his later life.