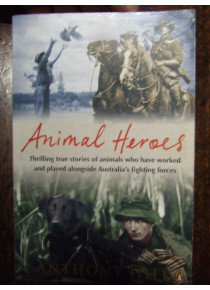 If you like the story of Bill the Bastard the Australian War Horse then this book is loaded with those other animal heroes of the Australian Army.
21 true stories of animals who have worked and played alongside Australia's fighting forces in both World Wars and in more recent conflicts, including the current war in Iraq. Dogs, pigeons, donkeys, horses, parrots and dolphins are some of the animals﻿