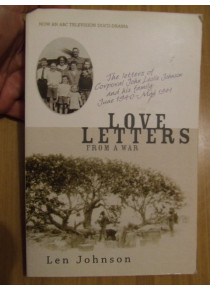 Love Letters from a War by L.Johnson : used book

Love Letters from a War WW2

The Author's father, Corporal John Johnson, was killed in action at Tobruk in 1941. His Father was a Carpenter, out of Walwa Victoria, who enlisted as an soldier with the 23rd Battalion 2nd AIF . He left behind a pregnant wife and seven children﻿. The Author wrote this book using letters sent home by his Father from June 1940 to May 1941 and also information gained from several Veterans who new John Johnson right to the end.
Excellent for anyone wanting more information of the life of the 23rd Battalion Albury's Own during WW2.
This book formed the basis for an ABC television docu drama of the same name.