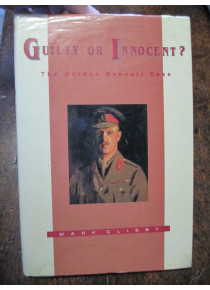 BOOK printed 1992 ' Guilty or Innocent The Gordon Bennett Case ' by M Clisby.
This is a more recent ( well 30 odd years ago) study of Gordon Bennett's command of the AIF's 8th Division and the campaign against the Japanese in Malaya during 1941-1942. It deals directly with the experience of the Australian troops on the mainland, and provides a context for the actions they were engaged in. This detail is taken directly from Gordon Bennett's war diary , his own book written in 1944 and released war records.

All relates to the surrender of Singapore and the controversial﻿ escape of the Australian Commander Gordon Bennett back to Australia. There has been much to say about Bennett's reasons for leaving his troops in the field over the years. It could have been deemed that it was a much more dangerous situation to try and escape. The Japanese POW hell had not taken place. Certainly MacArthur left the Phillipines and no question was made of his action. Gordon Bennett did provide valuable information regarding Japanese battle tactics. This info was distributed to the troops. But his Singapore Escape was the end of his military career. Should not be forgotten that Gordon Bennett had an outstanding 1st War record dating back to Gallipoli .