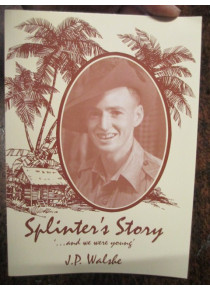 Splinter's Story and We Were Young by J P Walshe : new book

The author of this military book was a member of the 30th Battalion 2 AIF during WW2. Jim Walshe survived the battles on the Malaya Peninsula and then years as a POW.

His mortar platoon was among some of the first Australian soldiers to oppose the advance down the Malaya Peninsular towards Singapore. He provides high detail accounts of Battles that the 2/30th Battalion took part in ending in the capture of Singapore. There is also a chapter on his POW experiences in Japan. His army nickname was 'Splinter'.
Anyone researching the Australian resistance to the WW2 Japanese advance in Malaya during WW2 andor 2nd 30th Bn Australian Army would find this highly interesting.