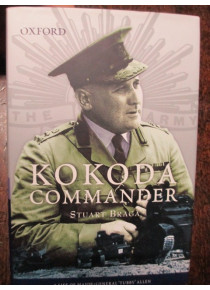 Biography of Major General Arthur Samuel 'Tubby' Allen, CB, CBE, DSO, VD﻿ who was a commander in the Australian Army during WW1 and WW2. He originally enlisted with the 13th Battalion AIF in August 1915.  In March 1916 he was transferred to the 45th Battalion. Allen was a veteran of the Battle of Pozieres in August and Battle of Messines fought in June 1917.  Allen was awarded the Distinguished Service Order medal for leadership during action in WW1. He took an active position in the writing of the battalion history after the war. This war book mainly deals with Allen's service during WW2.

He was made a commander of the Australian 16th Brigade 6th Division﻿ fighting at Bardia and Tobruk. He then commanded Australians in the Greek campaign, Syria. But in early 1942 was recalled to Australia to take charge of the defence of New Guinea against the Japanese onslaught.
It was during this command that Allen attracted criticism from General Douglas MacArthur and General Thomas Blamey regarding the speed and fighting retreat of the Australians  along the Kokoda Track.
He was controversially relieved of his command for this reason. This has remained a contested decision and is still debated by Australian Historians.   ﻿