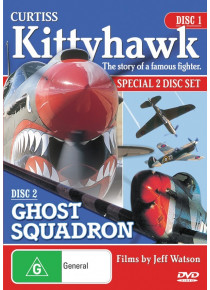 The Curtiss P-40 Kittyhawk also known as Warhawk Tomahawk. The Kittyhawk although outclassed performance wise during WW2 was a popular fighter with pilots as it provided a stable gun platform - in many cases there was no choice it was the only fighter available!
This DVD is an Australian production so it is near 100% Australian RAAF / veteran based stories of this famous ww2 fighter.
Great stories from Wing Commander Gibbes about his times with the Kittyhawk and also a remarkable story on his capture of a Messesrschmitt 109 in North Africa. This is now the only Messesrschmitt 109 war veteran in existance. Ex PM John Gorton also was a Kittyhawk pilot veteran and is also featured in the DVD .
Comes with the bonus DVD Ghost Squadron - The Confederate Air Force.