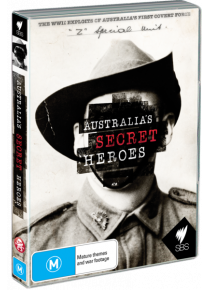 Just screened on SBS over three episodes, this SBS program is the graphic history of Australian Z Special Forces historic WW2 missions. The DVD doco drama shows the life and times of the Z men’s wartime skills and their jungle training. They even have some of Z men’s own descendants try the training regime – was it a genetic capability?

The series ends with the doco drama of Z Force’s emotional expedition to Borneo, which was one of the groups most valorous campaigns.

Australian Z Force was based on British SOE. In May 1942 the Australian HQ was set up in Melbourne. A training camp was established near Cairns which was known as “Z” Experimental Station. Z Force was added to the Australian order of battle in June 1942.

The Allied Intelligence Bureau was formed to make surveillance of intelligence and propaganda. Like its modern day counterpart, the SAS, all members were volunteers and were drawn from all three services. The sensitive secret operations of the unit meant that no insignia were ever worn. However, Z Force members when qualified could wear a ‘parachute wings badge’ which was similar to that being worn by the 1st Australian Parachute Battalion. Worn on the sleeve until after an operational jump it was moved to the left breast above award decoration – the current SAS badge was based on this Z Force badge.
During WW2, Z Force was a raiding, propaganda, sabotage unit which was also responsible in raising behind the line guerrilla operatives against Japanese Forces.
Thus men other than Australians were recruited into Z Force.

The most notable successes were, Krait Z Force attack on Singapore Harbour in September 1942, Jaywick, OBOE, Semut, organisation of guerrilla armies in Borneo and the Z Force operations from being attached to US Submarine Fleet operating from Fremantle Western Australia.