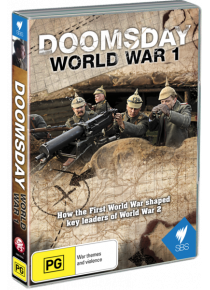 The First World War – carnage on a scale never-before seen.
But how did it all start? And how did some key figures of WWII fare in the earlier war?
In three episodes we trace their careers back to the battlefields of WWI, including Adolf Hitler, Bernard L. Montgomery, Hermann Goering, Charles de Gaulle, George S. Patton and Walter Model. Their personal stories are set against the backdrop of a bigger political and strategic reality.
Carefully restored and colourised archive combined with re-enactments and personal testimonies portray individual fates, providing the detail behind the bigger picture.
Episodes: 1. The Fall of Man Montgomery and Hitler: two WWII leaders who participated in the start of the conflict that would define the first half of the 20th century – WWI. Like so many others, they go into the battles of the “Great War” in high spirits – still oblivious to the real meaning of the advance of modern military technology: random and merciless killing on a scale previously unheard of and hitherto technically impossible. It is a turning point in the history of the world. Eventually, Hitler will use his wartime experiences to bait the German people with the promise to make amends for the results of the First World War.

2. Purgatory In March 1916 at the battle of Verdun, Captain Charles De Gaulle is wounded by a bayonet and forced to surrender to German forces. It’s a bitter moment for the battle-hardened officer. His time as a German POW shapes his impressions of Germany, and will have a profound impact on his stance during World War II and right into the post-war era. Meanwhile, Herman Goering makes reconnaissance flights over the battlefield of Verdun and downs a number of enemy aircraft. He’s fighting the ‘chivalrous war’ in the air. Would their later actions have been different, had their WWI experiences have taken an alternative shape?

3. Battle of Nations In August and September 1918 the German Army suffers defeat after defeat, overwhelmed by Allied superiority in supplies, men and machinery – a crushing experience for a devout nationalist like the young Walter Model. The emerging American tank troops have been trained by Lieutenant Colonel George S. Patton. At the end of September 1918, he leads some tanks into battle and is wounded. Recovering from his wounds he witnesses the end of World War One. Germany has been brought to its knees. But could the bitter pill of defeat have created a generation of young Germans, ready to avenge the humiliation of WWI?