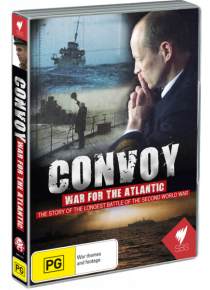 “During the war only one thing ever frightened me – the U boat peril. Battles might be won or lost but our power to fight and keep ourselves alive rested on our struggle to keep control of the Atlantic.” Sir Winston Churchill

By May 1940, Britain was an isolated nation, cut off from the rest of Europe. The Nazi’s controlled France and Norway, posing a deadly threat to our southern and eastern shores. Cornered by Hitler, Britain’s only hope for survival was to import food, raw materials, and munitions from America.

Merchant ships sailing the Atlantic in convoys became the nation’s crucial lifeline, one that the Nazi’s were determined to break.

The story of the Convoys is a tale of compelling drama, full of bravery and tragedy. It takes us into the lives of hundreds of thousands of unheralded men whose incredible everyday courage, played out in the cruel seas and cold skies of the North Atlantic changed the course of the war. ﻿