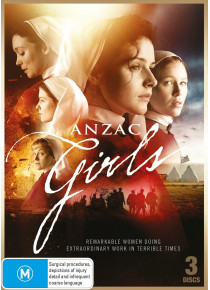 ANZAC Girls is a dramatised mini series based on the book, 'The Other ANZACS' or retitled 2014 'Anzac Girls' edited by Peter Rees. An Australian historical  book detailing the stories and real life experiences of World War One Australian Nurses AANS. After WW1 several of the nurses wrote books/diaries of their ordeals during the war, these and other memoirs form the basis of Rees' research and thus the background for the Anzac Girls Mini-series. The Mini-series portrays real events and real people. Beginning in the heady pre-Gallipoli days in Egypt, moving through the devastation of that campaign and the utterly unexpected casualty count.

Within twelve hours of the slaughter at Anzac Cove they had over 500 horrifically injured patients to tend on the one crammed hospital ship, and scores of deaths. Their strength and humanity were remarkable.

﻿The story follows the nurses, through the bitter months on the barren island of Lemnos, onwards to the slaughter of the Western Front.

ANZAC Girls is personal, intimate and raw.
Surprisely and a credit to the production, that all major events and people shown in the series are historically correct.

Lest We Forget the compassion and courage shown by these Australian and New Zealand women to the boys of the ANZAC legend! ﻿