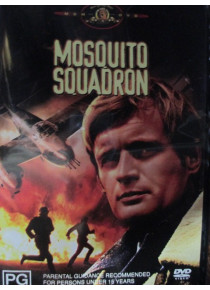 Only recently released on DVD this movie will be of interest to all WW2 Aircraft enthusiasts.﻿

Mosquito Squadron is a 1969 British war movie based on raids made by RAF Mosquito Fighter Bombers on German V1 Rocket 'Flying-Bomb' installations during WW2.

Importantly at the time, 4 actual de Havilland Mosquito aircraft were used for filming sequences.
It was made after the success of the earlier 1964 movie 633 Squadron which also depicted Mosquito Fighter Bombers.﻿

Have a look at the trailer by clicking on the video tab above.

Also of interest would be the Mosquito Museum