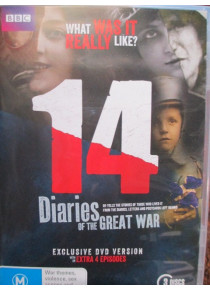 14 Diaries Of The Great War

14 Diaries Of The Great War

A massive production of near 8 hours duration made in several countries. This is the english language version which was screened on Australian SBS and History Channel.

This moving series retells the story of the greatest war mankind had ever seen in a unique way. It allows viewers to experience World War I solely through the eyes of those who experienced it. Based on this concept, an international team of authors and researchers, as well as broadcasters from all over the world have chosen the 14 most vivid and emotional stories left behind through personal diaries, letters, postcards and telegrams, from those who lived it.