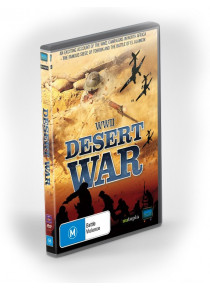 An Australian dramatised documentary about the famous Siege of Tobruk and the Battle of El Alamein – with interviews from surviving Desert Rats.
This program was made by Western Australia producer Electric Pictures, for the Australian Broadcaster the ABC. The program originally aired as a two part series. The DVD has the following extra features
1. The Story
2. The Drama
3. The Veterans
4. Australian Teachers of media Study Guide
16:9 Aspect, color, PAL encoding, all Region DVD (Region Free)
Duration Main Feature 147 minutes

Episode 1  Tobruk
As the Nazis sweep all before them in Europe, the Anglo-Australian garrison in the small town of Tobruk in North Africa inspires the world by resisting the most celebrated German General of the Second World War.

Episode 2  Alamein
A brilliant Axis intelligence coup helps Erwin Rommel’s Afrika Korps sweep forward to threaten Cairo and the Suez Canal. At a tiny railway halt called El Alamein, the Allied Eighth Army – bolstered by Australia’s ‘Rats of Tobruk’- draws a line in the sand and fights a battle that will transfix the world and help turn the tide of the Second World War.