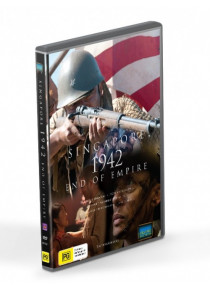 Singapore 1942 End of An Empire DVD

Its now been over 70 years since the British Empire's greatest loss was sustained when Singapore fell to the Japanese forces in 1942. It was one of the most momentous Battles of last century which resulted in the "largest capitulation" in British military history with over 100000 troops becoming POWs.

Episode 2
Japanese Imperial Army soldiers pour onto Singapore Island under the skilful command of General Yamashita. They quickly break through a flimsy line of raw Australian troops, outmanoeuvre General Percival and drive his combined Commonwealth forces back to the Singapore city. Indian soldiers, seeking independence, join the Japanese and fire on their former masters. Australians leave their posts while Malays and Chinese divide along political and ethnic lines. The British finally begin evacuating Singapore but priority is given to the safety of whites. A tipping point is reached – the fall of all the colonial empires throughout the region is now inevitable. Australia is dragged kicking and screaming to the Asian table.