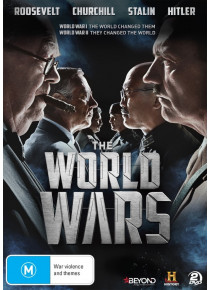 As recently seen on History Channel complete Episodes.
2x DVD Disc 264 minutes duration + Bonus Features
Adolf Hitler. Franklin Roosevelt. Benito Mussolini. Winston Churchill. Charles de Gaulle. George Patton. Before they were the Giants of WWII, they were infantrymen and privates in WWI, the “war to end all wars.”
THE WORLD WARS™ from HISTORY® brings you the fascinating story of the devastating World Wars of the 20th-century through the eyes of those men whose characters were forged in the WW1 trenches before they commanded the Armies of the world on the brink of WW2. See how, the Battles of Ypres and the Somme during WW1 influenced the Battle of the Bulge and the invasion of Normandy in the Second World War. The iconic men of WWII became synonymous with either battlefield glory or murderous fascism.

Bonus Features on the DVD Never-Before-Seen on TV!
• Deleted Scenes: Over 1 hour of footage cut from the original broadcast
• Characters in Depth: Churchill, Hitler, FDR, Stalin, Patton, MacArthur
• Plus 10 fascinating featurettes on both wars