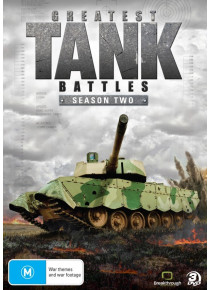 Greatest Tank Battles Season 2 is an action-packed 10-part series that brings to life the most gripping and monumental tank battles ever fought. Filmed on battlefields across the world, and using stunning, ultra-realistic CGI animation and eyewitness accounts, this original series puts you in the heat of the battles.

This Series includes the First Tank Battles of WW1 with WW1 expert Andy Robertshaw in the Field explaining the Battle.

These stories bring to life epic conflicts such as those on the Second World War's Eastern Front, where 100,000 tanks clashed in history's biggest war. But some stories push ever farther afield to bring the viewer eyewitness accounts of pivotal tank battles in Korea, Vietnam and the Middle East.

Greatest Tank Battles takes you deeper into the mechanized battlefield than ever before, revealing the delicate balance between man and machine - between victory and death. It puts viewers in the commander's seat and sends them into the heart of the action.

The ten parts are:

The Battle of France .

The Battle of Tunisia.

Tank Battles of the Great War.

The Battle for the Baltics

The Battle of Stalingrad

The Six Day War: Battle for the Sinai.