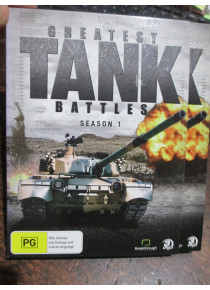 A Top Doco huge on detail

Greatest Tank Battles Season 1 is an action-packed series that brings to life the most gripping and monumental tank battles ever fought. Filmed on battlefields across the world, and using stunning, ultra-realistic CGI animation and eyewitness accounts, this original series puts you in the heat of the battles.

Media is Pre-Owned
This DVD is Pre-owned - It Is in Near New Condition and has been tested and guaranteed to work
DVD Information:
Australian Region 4
DVD Duration Time minutes:
430 minutes 3x DVD discs
Movie Format:
16:9 Aspect - PAL Format - DVD