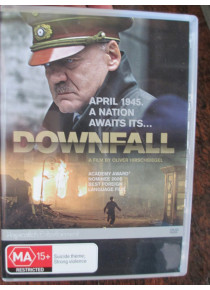 Downfall is a German Movie which was a Academy Award Nominee for Best Foreign Movie 2014. Depicts the last days of Adolf Hitler based on book by Hitler's secretary Traudi Junge. Great production and acting but reading subtitles can be distracting to the movie. The dvd titled The Bunker is also based on Hitler's secretary Traudi Junge﻿ book. So the historical aspects are near the same but The Bunker is in english language.