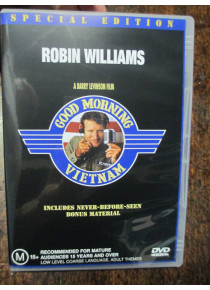 Good Morning, Vietnam USA movie was released in 1987. Opened to a huge box office success, it was one of the most successful films of the 1987, becoming the 4th highest grossing film of the year. It was one of Robin Williams most popular films and was said by critics as being "the best military comedy since MASH"﻿﻿

Set in Saigon in 1965, during the Vietnam War, the film stars Robin Williams as a radio DJ on Armed Forces Radio Service, who proves hugely popular with the troops, but infuriates his superiors with what they call his "irreverent tendency".

The story is loosely based on the experiences of AFRS radio DJ Adrian Cronauer. Cronauer actually co wrote the original storyline for Good Morning Vietnam