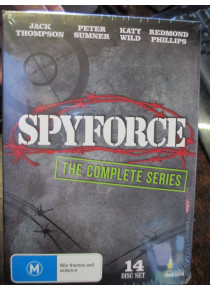 Spyforce was an Australian TV series produced from 1971 to 1973, based upon the adventures of Australian Military Intelligence special forces soldiers in the South West Pacific during WW2.

As the opening words shown in the beginning of the program states:

Early in 1942 the Japanese Army swept through the South Pacific towards the Australian mainland. They overran the Malay Peninsula and reached deep into the jungles of New Guinea. As a result numbers of civilian planters and soldiers were formed into highly trained espionage teams by Allied Headquarters in Australia. These men were directed into sabotage operations deep behind enemy lines throughout the Pacific area. Much of their work must remain top secret. One of these groups may well have been called: Spyforce.

A popular program which was produced for the Nine Network and US Paramount. In all there were 42 episodes produced.

All are recorded here on the 14 DVD disc Collection.