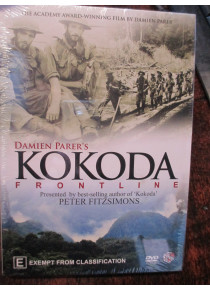 DVD titled ' Kokoda Frontline ' The battle for Kokoda raged for seven months along a single-file track that crossed some of the most rugged and inhospitable terrain in the world. Renowned wartime news cameraman, Australia’s Damien Parer recorded the struggle amid great hardship and danger and successfully delivered the footage back to Australia.In September 1942, two movies were released based on Damien Parer’s war footage. “Kokoda Frontline” went on to win an Oscar for Best Documentary. Peter Fitzsimons published his best selling book on the Kokoda Campaign in 2004. While researching his work he acknowledged the unique contribution of Damien Parer. See pic above for all Parer's films included on this DVD