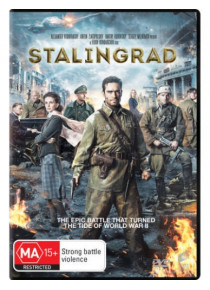 Stalingard is a Russian movie which is set in the early part of the Battle of Stalingrad (23 August 1942 – 2 February 1943). The story follows soldiers from both sides as they fight to survive while saving the lives of their loves, and struggle with retaining their humanity in the face of certain death. The Battle of Stalingrad﻿ is said to be a defining turning point of WW2.
Opened to huge box office in Russia (set a new box office record﻿), then gained mixed reviews in the west. ﻿